It is simply to install iumio Framework Standard Edition.

To create your first app, make sure you are using PHP 7.2 or higher version and have an installated composer executable. If you cannot install Composer, download the composer.phar instead and put it on the root of the projet. (Download composer.phar)

Let’s create your new project with the standard edition :

These command will create a project on your_project_name directory and generate the framework directory architecture. All dependencies of iumio Framework SE will be installed on vendor directory.

You have two possibilities :

iumio Framework SE have an dependency which able to start a web server directly with the command line :

To run your project :

A display message will confirm your of the server running and the url to go such as http://localhost:8000. Your will be redirected to the Framework Installer.

Use the framework installer 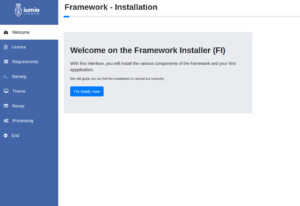 When your would install your first application, you must to use the Framework Installer Web Tools.

Follow all steps of this installer to install your first app.

You have two possiblities with your app :

This installation is guided.

Notice : Your application must not start with a number or a special character.

After that, your will redirect to your app.

Enjoy your first app with or without a themes

To install an other application, Go to the Framework Graphic Manager or Framework Console Manager

We use cookies to ensure that we give you the best experience on our website. If you continue to use this site we will assume that you are happy with it.Ok